With the first case of Ash Tree Dieback found on our native Irish Ash trees this week we should all become aware of the harm this disease can cause and how to recognize its symptoms.

Ash trees are the most common tree to be found in Ireland and after whitethorn, it is the most common tree of Irish hedgerows. Ash can grow to a mature height of around 26M and is a fast growing tree. It’s Wood is strong and flexible and the choice wood for making hurleys, snooker cues, tool handles and furniture. The Stem or trunk of the Ash tree is quite distinctive as it is smooth and grey in colour. The tree can also be identified through is foliage. The Ash has pinnette leaves which are green in the summer, yellow in autumn and fall off in winter. In winter the Ash tree can be recognized from its distinctive black buds 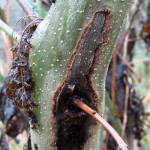 Side shoots on stems 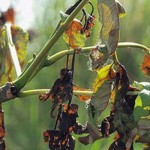 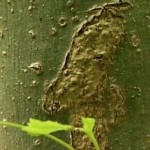 But the most distinguishing feature of the ash is its stately appearance once it has outgrown all competition around it and developed into a broad mature tree. If you were to look for a down side to Ash it would be the relatively short time in which the plant is in leaf – Ash can be as late as may before coming into leaf and is one of the first to loose them.

There if much folklore surrounding Ash trees, One such belief is that we can predict the upcoming summer’s weather by when the Ash tree comes into leaf with the saying; ‘Ash before Oak – in for a soak. Oak before Ash – in for a splash’ So, lets hope the Oak can beat the Ash every spring to ensure only a ‘splash’ of rain over the summer months!

Ash woods can be found along the West coast of Ireland and in Co. Fermanagh, these broadleaf forests, as well as those many stately trees dotted across our countryside and in our hedgerows are now all in danger due to Ash Tree Die Back. This disease, Chalara fraxinea first entered Ireland through imported trees with the first sighting 12 months ago in October 2012. Since then 96 cases of the disease have been found, but all these cases were found on imported trees only. The worrying development now however is that the Department of Agriculture has found the first case of the disease on a native Irish Tree. The 97 case was found in Leitrim. This means that all trees found within a 250 M radius of the infected tree will have to be destroyed. Whether the tree is only a 1yr old sapling or 26M tall specimen, it will be to be cut down to prevent the spread of the disease. This will also impact on wild life with the Ash tree being home to 41 different insect species

Farmers, horticulists, gardeners, foresters and the general public can all do their bit to help control the spread of Chalara. The first thing to note is the symptoms of the disease: