It has certainly been a mild winter so far this year and the worst of the winter may seem behind us but the experienced gardener would say ‘never rest on your laurels’ and assume there won’t be more bad weather to follow. The Irish weather can throw up any range of possibilities and it would be best to prepare for the worst and keep frost fleece protection at the ready. 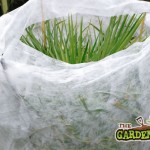 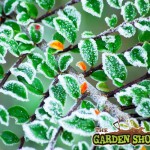 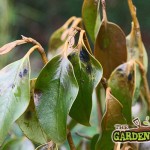 Frost is always hard to predict, not only when it will hit but also where it will hit. We can say with confidence that frost is most common between mid October and mid March, and that the frost is worst in the midlands where temperatures are generally 2 degrees lower than coastal counties in winter months. These areas have suffered heavily from the effects of frost in the past and temperatures have been as low as -17 degrees meaning that even the heaviest of frost fleece would not have prevented the death and destruction that occurred.

Frost can hit parts of your garden in 2 different ways. The first and more common frost damage occurs in a frost pocket. A frost pocket is a low lying or enclosed area of your garden where the wind is still and can not move. These areas see frost as still air remains colder for longer and can not warm up. The second example of frost damage in the garden is caused by wind chill. This is the complete opposite of a frost pocket and is where a plant, shrub, tree or hedgerow is exposed to the northerly winds which freeze the plant’s leaves. In either case the only way to protect your plants from frost is to cover them with a frost fleece.

Certain plants are more tender than others and should never be planted in a frost pocket or an areas that is exposed to northerly winds. Plants such as Phormiums, Choisya and Cordylines can be killed in these circumstances. Using a frost fleece to cover these plants is still always recommended but you should still be hoping that temperatures don’t drop below -12 degrees.

An alternative to using frost fleece would be to bring your plants indoors, into a greenhouse or potting shed. If you are using wooden garden planters or hanging baskets these should be moved indoors. Tender bulbs such as dahlias should be dug up, cleaned and stored indoors in a dry, cool place. Seeds from annuals and perennials that you have collected in autumn should also be cleaned and stored indoors in a dry and clean place before planting out again the following spring.