Warm windy weather brings with it, the horrible fungus that is Phytophthora infestans. More commonly known as Potato Blight, Phytophthora multiplies at alarming rates in warm, damp conditions generally around the months of June and July. Combined with windy conditions which is required for the fungal spores to spread, Phytophthora can reek havoc on your garden. 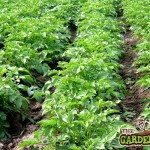 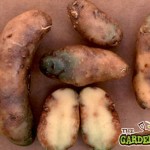 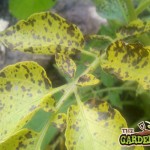 The solution to this is to act before any problems arise and apply Bordeaux Mixture to your potato crops. Bordeaux Mixture is a compound of Copper Sulphate and is a garden fungicide that has been used since the beginning of the 19th century and was first used to discourage members of the public from pillaging fruits from vineyards in France. It was later understood that the Copper Sulphate mixture, while being bitter to taste and uninviting to look at,  also prevented the build up of powdery mildew on crops.

Bordeaux Mixture is so named because of it’s use in the Bordeaux region of France and was soon used as a garden fungicide on a variety of crops including tomatoes, top fruits, vines and potatoes.

Today, in Ireland Copper Sulphate is mostly used to control Blight on Potatoes. For best results it is important that you stay tuned in to radio reports and blight forecasts on Met Eireann. Once a blight warning has been announced you should waste no time in getting out and coating your potatoes foliage with a diluted Bordeaux mixture and water solution.

The general application rates for Bordeaux Mixture is 35 grams to every 1.5 litre of water. Although be sure to read instructions prior to application. When applying be sure to apply to both top and underside of foliage, coating every part of the plant. In some cases you can add small drop of washing up liquid to the mixture as this acts as a sticking agent and will aid the mixture to cling to the foliage and be absorbed better.

Copper Sulphate can also control powdery mildew. This is one of the most common garden diseases and effects a wide range of ornamental garden plants including roses. Like phytophthora, powdery mildews are more common and spread in warm, damp conditions

Be sure not to over apply this compound as over application can be harmful to your garden soil and organisms such as earthworms can be effected and number depleted. The leeching of Copper Sulphate into streams and rivers can also have a negative effect on fish

Once applied copper Sulphate will protect your crop for a number of weeks but re application will be necessary during the warm months of summer. If applied before signs of blight infestation appear then you will get good crops free of the disease.