Preparing your vegetable beds for spring sowing can start as early as the previous autumn. The sooner you prepare the soil of your raised beds the better chance your soil will have to settle down and for life to return to it after the turmoil of the digging & weeding 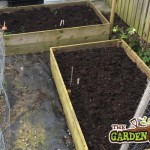 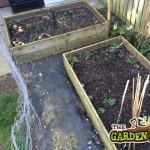 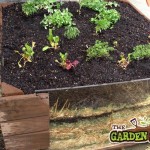 These days reduced cultivation and no dig gardening is becoming more popular as we learn more about soil and the delicate balance of soil’s ecosystem. The thought is that soils should not be disturbed or turned but allowed to exist as it would do in nature. The benefits of not disturbing the soil means:

So, when I was preparing my raised beds this year I began late but I choose to do only surface cultivation, and to minimise soil disturbance. So, I began with trowel in hand and dug out the surface weeds, ensuring that I removed all the roots as I went. Then I continued along the rest of the raised bed, pushing the trowel down into the soil. If I felt a stone I would dig it out but in most cases the raised beds appeared free from any stones so the only digging work involved picking out weeds and that remnants of last year’s harvest
Once done I got a few handfuls of chicken manure pellets are scattered them over the surface of the beds and lightly raked them into the soil
That was the beginning and end of this year’s ground preparation for my beds for this year and in total the whole process took about an hour and was nothing more than a leisurely exercise
The next step will be sowing out vegetable seeds into narrow drills with compost and then transplanting out maturing seedlings as the weather really warms up. The work load has proven quite minimal and the rewards quite exquisite
If you want to develop a no dig system in your garden then you should consider using raised beds & grow bags. This method saves on time and improves the condition of your soil. You could also us organic fertiliser products such as soil renew. This is a great product for breathing